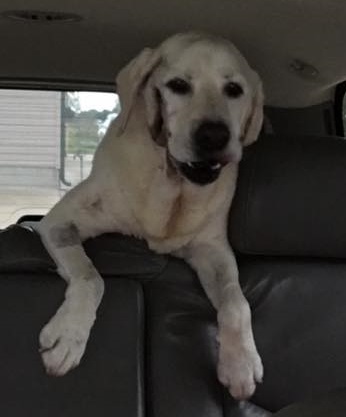 Ozzie, the sweetest dog on the planet who has endured so much abuse and neglect suffered yet another set back. Ozzie had a blockage in his intestine, had surgery on a Monday and actually had to have part of his intestine removed. He made it through the surgery and on Tuesday was sitting up and walking, but still would not eat or drink. Wednesday he took a turn for the worse and we lost him that afternoon.

The surgeon’s at MU did not think there was a good prognosis for yet another surgery. Ozzie’s immune system was simply too compromised to fight off the infection that had set in after the first surgery. Ozzie is now in doggie heaven, pain free and cone free. Ozzie was surrounded by his loving foster parents when he took his last breath. 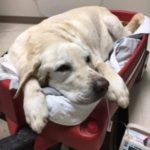 This was the last photo taken of Ozzie at the University. He was too weak to walk so they brought him out in this red wagon. We will not stop fighting to bring justice for Ozzie and will follow through with his court case until the bitter end. Yesterday was a very tough day and heartbreaking to say the least. I’m just sorry we could not do more for him. RIP sweet Ozzie.

Our boy Ozzie is a 10 year old Labrador Retriever. On September 30, 2016, Ozzie was removed by Centralia authorities from his owner’s property and she was charged with animal abuse and neglect.

Ozzie was found with open wounds in addition to being underweight. He was taken to the Centralia Vet Clinic where they found not only a neglected wound from a ruptured abscess on his face, but also a ruptured and infected anus, and pseudomonas in both ears. Ozzie’s face and inner ears were basically rotting away as his owner looked on.

Ozzie has gone through multiple surgeries to remove dead and dying tissue from his face and anus. He has fought blood infection and has a compromised immune system due to years of neglect and lack of veterinary care. A statement made by his abuser from the police report reads “I could not stand to look at him so I stopped looking.” Ozzie was kept outside, alone, and was suffering in agony.

Ozzie is taking multiple medications, needs yet another surgery on his face, and is on a prescription food for allergies available only through the vet’s office. Through all of this, our boy remains sweet and in good spirits, loving his foster home and foster sister Winnie, but he is still recovering. He has been in a cone since we rescued him and continues to visit the vet frequently. We discovered Ozzie also has food allergies, most likely due to his immune system fighting so hard to recover. His vet bills continue to grow and his prescription food costs $95 a bag. But we won’t give up on Ozzie, because he never did.

After numerous court dates in an effort to seek Justice for Ozzie and ask for the maximum sentencing under the low, a guilty plea was entered and the sentencing is; restitution to the City of Centralia for $350 to cover the initial vet bills, 40 hours of community service and a court order banning the owner from acquiring any more pets as long as she lives in the City of Centralia.

While it doesn’t seem like much considering what Ozzie endured—it is something. Many of those who neglect and abuse animals like Ozzie are never charged with a crime and never suffer any consequences. We are grateful that this may prevent this from happening to any other animal at the hands of Ozzie’s former owner. We are also very appreciative for the diligence of the prosecutor in his case.

Ozzie’s story has been shared via our social media pages, but here is his story in one place. We will continue to post updates. Please share Ozzie’s story and donate toward his vet bill and continued care as we try to find this good-natured, senior lab the loving home he deserves.

Thank you to all who have generously donated so far! Click the DONATE button on our website to contribute to Ozzie’s recovery.